Who is Hermann Goerner?

Hermann Goerner aka Hermann Görner was born in 1891 in Saxony, Germany.

He was a professional strongman, a competitive strength athlete, and toured with Pagel’s Circus.

His lifelong passion for strength began when he started lifting at the age of 10.

His powerful physique explains why he also worked as a studio model for artists:

He became a professional strong man in 1921 despite losing an eye during the first world war.

As a result, Hermann and his wife Elsie toured with Pagel’s circus, appearing in countries like South Africa, Germany, and England.

Some of Goerner’s amazing feats of strength are unmatched to this day.

He was a master at the deadlift as you can see from his jaw-dropping lifts:

Can you imagine doing a one-handed deadlift of 730 pounds?

How about a two-handed?

But, get a load of this – Goerner did a right hand deadlift of 730-pounds.

If that is not incredible, what is?

See what a 500 pound one hand lift looks like.

This one-arm deadlift is performed by a man known as the world’s strongest pro bodybuilder, Stan Efferding:

Stan Efferding does a 500 lb deadlift with one arm

Besides watching the video to see what a 500 pound one hand deadlift looks like, there is one more great reason to view it.

Efferding gives great tips for anyone learning to deadlift.

He speaks about the importance of acceleration off of the floor.

And makes the point to stay focused on exploding off the floor through the ceiling.

Seeing the video above will give you some perspective on Goeren’s one arm deadlift of 730 pounds on October 8, 1920, in Leipzig, Germany.

Most Impressive Feat of the Last Century

One of Hermannn Görner’s best deadlifts took place on October 29th of the same year, 1920, when he achieved a Guinness World Record with a one-handed deadlift of 301 kg / 664 lbs.

A stupendous feat of strength, It still remains the current record.

To date, no one has ever deadlifted more than Hermann Goeren with only one hand!

Moreover, to say that he had a strong grip is an understatement, because his grip strength was beyond phenomenal. 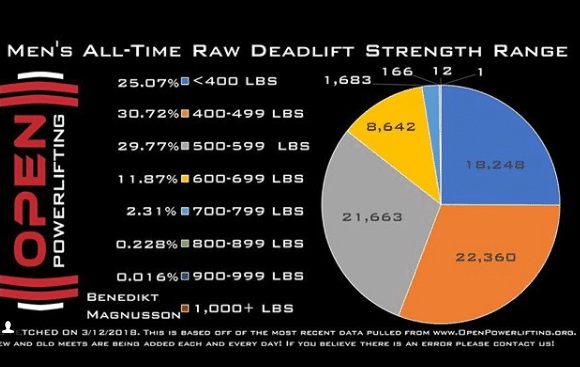 From the above chart, you can see that only the most elite powerlifter today deadlifts over 800 pounds.

And that is with all of the nutritional and training methods that we have.

Think of how shocking it is that Goerner did the following deadlifts:

Goeren did precisely that one hundred years ago.

Are you impressed yet?

If not, feast your mind on this:

To get a sense of Goeren’s strength, it is helpful to know a little about the sport of Olympic weightlifting.

There are two lifts in Olympic weightlifting.

In the snatch, the goal is to lift the weight from the floor to overhead in one movement.

This takes incredible strength and speed.

For the clean and jerk, you lift the weight to shoulder height, hold for a moment, and then press overhead.

They are both much easier to write about than perform.

Here is an excellent example of the sport of Olympic weightlifting; first you will see the snatch, which is the first event, and then the clean and jerk.

Dmitry won this championship by performing a two-hands snatch of 192 kg.

Hermann Goerner could do a one-hand snatch of 229¼ lbs using his right arm in the early 1900s.

You need an Olympic champion like Klokov to outperform Hermann Goerner.

Below is a video of the powerful Klokov, the current President of the Russian Strength Sports Association.

The Great Klokov with a One Arm Snatch 9.25 lbs Less than Goerner

One of the reasons that many of his records stand unmatched for the last 100 years is because his gripping strength was unparalleled.

Using only his index and middle fingers of each hand, on November 30, 1933, at the age of 40, Hermann Goerner deadlifted 600 pounds.

He used both an overhand and reverse grip.

No wonder his nickname was Goerner the Mighty!

And now, you see why he was considered the world’s strongest man.

In 1951, Edgar Mueller wrote a book about Hermann’s life under the title of Goerner, The Mighty.

Check out this wonderful tribute to Mr. Goerner. – This includes a picture of his famous plank leg press.

What aspects of this famous German strongman’s strategy can you apply to your deadlift program?

The most essential Hermann Goerner deadlift training tips are:

“Each training session averaged two hours when performed in the Club, and when training in the open air it would vary between three and four hours – sometimes even longer.”

“He rarely exerted himself to anywhere near the limits of his astounding power. In many cases, he could have lifted more, but he always refused to do.” 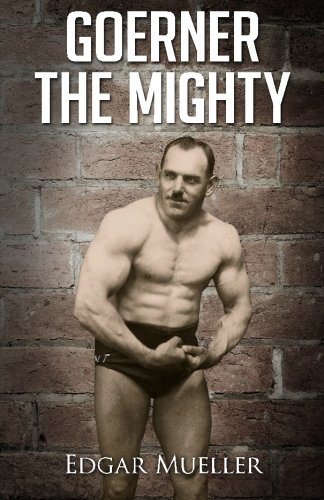 Unless you are in a powerlifting competition, there is no reason to attempt your one-rep max, ever.

And even if you are competing, it is still never a good idea to try your absolute maximum.

If you do, you know that injury is just around the corner.

Do a wide variety of exercises

Mueller also writes that Goerner trained for long periods, from two to four hours at a shot.

This is similar to the most important deadlift tips from Ed Coan.

Success leaves clues, make sure you record every workout and add weight.

Here are three posts to get you started on your deadlifting, fitness, and body transformation journey:

After learning from the Hermann Goerner deadlift, what’s next? Check out more deadlift advice from these famous deadlifters:

About Squats and Deadlifts:

Squat and Deadlift Workouts and Programs:

Never Give Up on Getting Fitter Than You Are Today