Home » What Is Powerlifting? A Beginner’s Guide To A Sport For All
15 shares

What Is Powerlifting – Introduction

And how can powerlifting benefit you?

It’s time you find out!

Strength is a priceless commodity.

Being strong makes many of life’s tasks easier.

From lifting and carrying your groceries to walking up a flight of stairs, strength helps.

Strength is also a critical component of many sports.

That’s why athletes from almost every sport include gym-based workouts in their training.

But, for some people, gaining and demonstrating strength is a means to an end.

In this article, we’re going to look at the sport of powerlifting and show that it really IS a sport for all!

In historical terms, powerlifting is a relatively new sport.

Humans have been testing and demonstrating their strength for centuries, but powerlifting was only recognized as a sport during the middle of the 20th century.

Olympic lifting is a much older sport.

In Olympic lifting, athletes compete in the snatch and the clean and jerk.

Olympic lifting also included a third lift, the press, but that was dropped from competitions in the late 1960s.

The Olympic lifts are very complicated to learn, whereas powerlifting is a sport based on much more straightforward, more common gym exercises.

In simple terms, powerlifting is a weightlifting competition where lifters attempt to lift as much weight as possible for one repetition.

The three main lifts in powerlifting are:

The lifts are contested in that order, and each competitor gets three attempts at each one.

The winner is the person with the biggest total.

Competitors are grouped into weight categories and age categories, and each lift is performed according to a set of standards to ensure that everyone is tested equally.

For example, competitors must descend to the same depth for squats – typically thighs parallel to the floor.

The weight categories are:

The age categories are:

Open: Anyone can compete

Some powerlifting competitions also include a strict curl event, and there are also push-pull meets that only involve the bench press and deadlift.

However, the three-lift version is the most widely recognized.

There are several different governing federations in powerlifting, including:

Each one has slightly different rules, as well as its own championships.

Like boxing, that’s why there are several world champions at the same time.

However, federations aside, the two main powerlifting variations are raw vs. equipped competitions.

Raw powerlifting is the most basic, stripped-down version of the sport.

In raw powerlifting, competitors are not allowed to use equipment that will significantly boost their performance.

Depending on the federation, raw lifters can wear lifting belts, knee sleeves/wraps, and wrist wraps.

Some raw federations are 100% equipment-free and only allow belts.

They also give some bounce out of the bottom of a rep.

This equipment can increase performance by 20-100kg, depending on the lift.

Of the two, raw lifting is the most accessible form of powerlifting.

Squat and deadlift suits and bench press shirts are expensive, are often made to measure, must be fitted correctly to work, and also take time and effort to put on.

You may not even be able to put them on by yourself as they are so tight.

They certainly aren’t comfortable to wear!

Lifters also have to learn how to use these items of equipment correctly.

It’s not a matter of putting on a bench press shirt and getting instantly stronger.

Equipped lifters use very specialized techniques to get the most from their suits and shirts.

Each lift in powerlifting is governed by rules designed to create a level playing field for all the athletes.

For a lift to count, it must be performed according to the rules and also completed successfully.

Athletes get three attempts each lift, with the heaviest being counted toward the final total.

If the competitor fails the same lift three times, they are disqualified.

If you plan to compete in powerlifting, make sure you read up on the governing federation rules to know exactly how to perform each lift to the required standard.

Also, train as you’ll be competing, so you are well-practiced.

For example, if you don’t do squats deep enough during training, you may end up being disqualified simply because you aren’t descending to the required level when you compete.

While there ARE slight variations from one federation to the next, the basics are:

Lifters can do high bar or low bar back squats.

After being told to do so by the referee, the athlete unracks the bar, squats down until their hip crease lines up with the knee joint.

Then, without bouncing, you must stand fully upright.

There are no mirrors in powerlifting.

You need to determine correct squat depth by feel and not looking at your own reflection.

This is a skill that can take time to develop.

After unracking the bar and being told to do so by the referee, the athlete lowers the bar to their chest and pauses.

The referee will say “press,” and then the athlete can complete their lift.

During the bench press, the lifter’s feet must remain on the floor, and their buttocks and shoulders must stay on the bench.

Lifters often arch their lower backs to reduce their range of motion and lift bigger weights.

The deadlift is the simplest of the three lifts.

Once given the okay to lift by the referee, the athlete must lift the bar in one movement.

It is not allowed to rest on the thighs (something that IS allowed in strongman competitions) and must also be lowered under control.

Lifters can use a double overhand grip or an alternating grip, with the latter being more common.

Lifting straps are NOT allowed in powerlifting but are permitted in strongman.

While there is nothing wrong with powerlifting just for fun, you can’t really call yourself a powerlifter unless you train and enter a competition.

The good news is that there are competitions at every level, and some are specifically for novices.

If you want to try competitive powerlifting, look for a friendly, local competition that caters to novice lifters.

Don’t worry too much about federations at this point; that only matters later in your lifting career.

Even an unsanctioned event is acceptable.

Read up on the rules and make sure you can conform to any local regulations.

For example, most federations insist that lifters wear a singlet and T-shirt for squats and bench presses and long socks for deadlifts.

Turning up to lift without the right clothing could lead to disqualification before you even attempt your first squat.

Give yourself 8-12 weeks to get ready for your meet.

This will give you time to build strength, peak, and taper, so you are in the best shape possible on the day of your competition.

Novice lifters should generally avoid trying to diet down to reach a lower weight category.

Dieting and shedding water weight could reduce your strength.

Instead, compete at your natural weight.

In the lead-up to your competition, start thinking about what weights you’re going to attempt for each lift.

You’ve got three chances, so you need to make them count, so you come away with the best possible total.

Ideally, your first lift should be a “banker” – a weight you know for 100% certainty you can complete, even on a bad day.

Remember, three failed attempts in any one lift means disqualification.

The last thing you want to do is fail your first lift and start doubting your performance.

Your next lift can be a bit more challenging but also reasonably safe.

Your final attempt is your chance to set a new personal best.

With two decent lifts in the bag, it’s okay if this attempt isn’t successful.

In summary, your lifts should be:

Check out the Best Beginner Powerlifting Program for Fitness and Strength if you are starting.

Even if you enter a raw powerlifting competition, there are some items of equipment you’ll need. 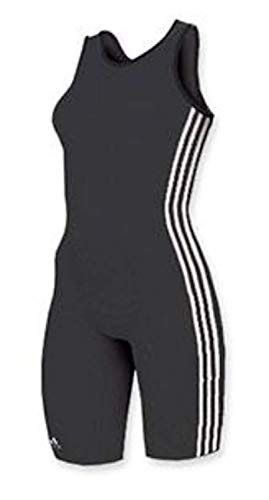 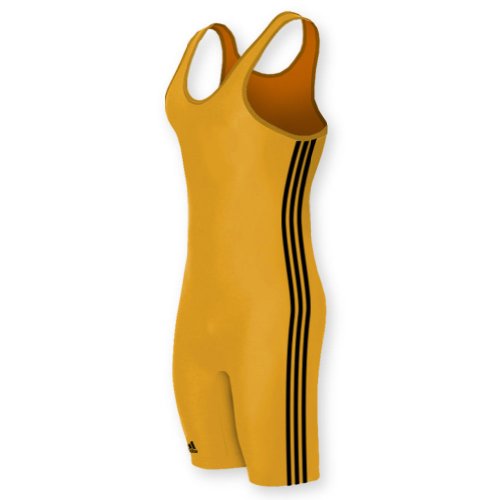 Wrestling, powerlifting, and weightlifting singlets are essentially the same.

If you need one for your competition, make sure you buy one and try it well in advance and get used to wearing it.

A singlet makes it easier for the judges to see things like squat depth. 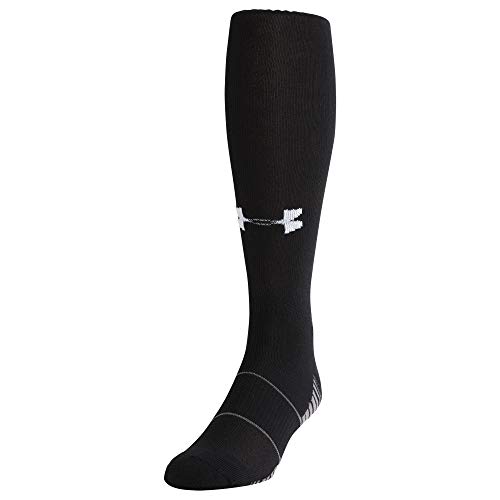 To protect your shins and keep your skin and blood off the bar if you accidentally scrape your legs, most federations insist on long socks for deadlifts.

Even if you never scrape your shins in training, make sure you’ve got long deadlift socks for your powerlifting meet. 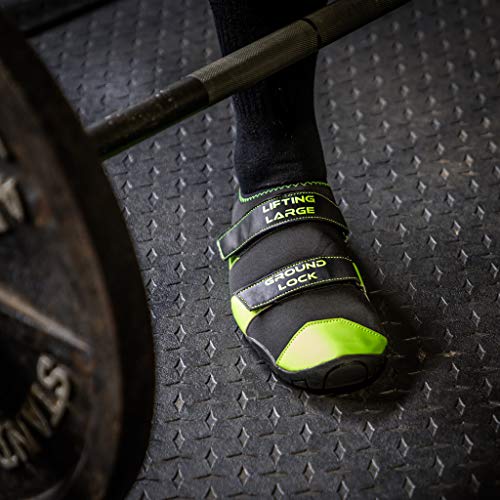 You cannot deadlift in just your socks, but you can wear deadlifting slippers and minimalist shoes.

These keep you low to the floor, reducing your range of motion.

With no heel, you should have no problem keeping your weight back for more stability and a bigger deadlift using these LiftingLarge deadlift slippers, approved by the IPF, USPA, and IPL powerlifting federations.

See the 5 Best Shoes for Squats and Deadlifts: 2022 Buying Guide as well as the 5 Best Deadlift Shoes On The Market Today In 2022 for more deadlift footwear options.

What Is Powerlifting – Wrapping up

Powerlifting is a gratifying sport.

It’s more accessible than Olympic weightlifting, easier to get into than a strongman competition, and you can even train for it in a regular commercial or home gym.

No matter your age, gender, or experience, it’s never too late to try competitive powerlifting!

But you don’t even have to compete to enjoy all the benefits this sport has to offer.

Just following a powerlifting-style workout routine will build strength, power, and muscle size and improve your general health too.

Whatever your fitness goals are, powerlifting could be the missing ingredient in your workouts.

Now that you are familiar with the essentials of the sport of powerlifting, you can get a feel for powerlifting training from several different programs: