Gilbert Tuhabonye’s story of survival will inspire you to make the most out of your day and life.

Do you think that you cannot handle what you are going through?

Whether it is physical or emotional stress?

Do you feel like you cannot get through the day?

Read how the ‘anchor’ of running enabled Gilbert Tuhabonye to survive genocide in Burundi.

Gilbert Tuhabonye was born in Songa, Burundi, in 1974 into a Tutsi tribe.

Just a year later, he faced a fiery death in a genocidal massacre.

At the age of 19, war exploded between the Hutu majority and the Tutsi minority tribes.

As a result of Ndadaye’s assassination, violence spiraled out of control between the Hutus and Tutsis.

Suddenly, Tuhabonye found himself targeted for extermination by people that just the day before, he knew as friends.¹

The Hutus hacked most of the Tutsi captives to death; the rest were burned alive.

Gilbert survived by burying himself under the charred remains of his former schoolmates and teachers.

After spending nearly 10 hours hidden beneath the burning corpses of his classmates and suffering burns over much of his body, Gilbert Tuhabonye managed to escape.

As the fire moved closer to him, in desperation, he grabbed a classmate’s burnt femur, using it to smash a window to escape.

He ran as fast as he could, with Hutus chasing after him.

Tuhabonye was the sole survivor of the attack.

He attributes his escape because of his deep faith, and a body made strong by running.

From Genocidal Survival to Success

A runner since childhood, he ran from that horror, into a new life.

A life of hope.

Having defied the doctors who said he would never walk again, Gilbert resumed his passion in life – running.

Indeed it was his talent for long-distance running that earned him a track scholarship in the USA, for Abilene Christian University in Texas.²

He published his fantastic story of survival in This Voice in My Heart: A Genocide Survivor's Story of Escape, Faith,...

Today, Gilbert is a retired world-class runner, the head cross country and award-winning coach at St. Andrews High School, and a community leader in Austin, Texas.

He is also the founder and winning coach of Gilbert’s Gazelles training group in Texas.

He helps provide clean water to improve the life of people, both Hutus and Tutsis in his homeland of Burundi, Africa, through the Gazelle Foundation³, of which he is a co-founder. 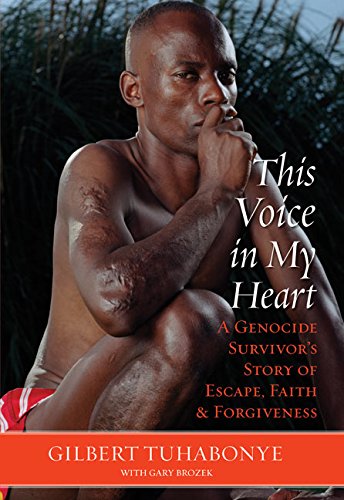 What can you learn from Gilbert Tuhabonye?

Are you struggling with circumstances in your life that feel out of control?

Do you encounter multiple levels of challenges on a day-to-day basis?

They range from minor annoyances that eat up so much of your precious time, like commuting, errands, bills, grocery shopping, carpool.

Whatever you are facing, it is probably not as immediately catastrophic as what Gilbert met that day lying under the burned corpses of his teachers and classmates.

Yet, he got out; Gilbert Tuhabonye ran out.

The operative word is that he ran out.

Because of his physical conditioning, he could outrun the Hutus pursuing him with blood in their eyes.

Gilbert himself says the following:

Note that he says that running is his therapy, his freedom, and grounds him.

Running is the vehicle for all other blessings that have come his way.

What is your anchor?

What activity can keep you grounded, can give you freedom from the challenges you face?

Gilbert Tuhabonye faced genocide, but running brought him to safety, and to a spectacular new life.

Imagine, from the burning embers of the Burundian civil war to providing clean water for thousands of his native country’s population, whether they are Tutsis or Hutus.

When I first read about Gilbert Tuhabonye’s life, I was ten years into trying to survive the aftermath of divorce.

Gilbert’s ability to use running as his therapy gave me hope that perhaps I, too, could find an anchor that could ground me.

Some activities that could help me fight depression and beat the obesity that was suffocating me physically.

His words that “running is my therapy, it’s my freedom. It grounds me. And makes me happy. running is the vehicle for all other blessings that have come my way.” stuck with me.

But what could I do?

But, what if you hate running?

If running is Gilbert’s therapy, it does not have to be yours.

Perhaps you can could some other type of activity, a movement, an exercise that will be a prescription for healing from mental and physical pain.

For example, the powerful prescription of:

Whether running, golf, yoga, or biking is your anchor, you need to experiment.

For sure, sitting on the couch and brooding over your problems will not solve them.

You have to start moving physically to move past your obstacles.

His beautiful words to forgive yourself, those who hurt you, and to live with joy will surely inspire you.

Gilbert’s world exploded in 1993 with the assassination of the Hutu president.

The biggest threat to losing hope is the life story of Gilbert Tuhabonye.

His experiences will inspire you to stay the course and weather the storms you are facing now.

Never give up, forgive yourself and those that hurt you, and live every day with joy.

That is the powerful message that Gilbert Tuhabonye shares, which can change your life.

Gilbert’s running anchor helped him survive a massacre you could never imagine.

Gilbert’s story inspired me to develop the positive anchors of:

to battle the wounds of depression and obesity.

If you can use a shot of inspiration, Gilbert Tuhabonye will motivate you never to get discouraged in life.

If you are struggling with obesity, see how this Obese Man Ditched These 3 Common Habits and Lost 75 Pounds in 6 Months.

And if you are facing depression, check out these 8 Promising Depression Solutions Your Doctor Didn’t Tell You.

² The Running Man by Gilbert Tuhabonye