Who is Derek Poundstone?

Derek Poundstone is a former American Strongman and Powerlifting champion.

During his stellar career, he solidified himself as one of the strongest men on the planet, taking first place in numerous Strongman titles between 2008 and 20013.

He grew up for the first ten years of his life in Spain and Italy.

Derek started his athletic career as a powerlifter and became a Connecticut State Powerlifting Champion in 2004.

By the time he started competing in Strongman competitions, he held 4 National Powerlifting records.

He went from the sport of Powerlifting to the sport of Strongman and that is where Poundstone achieved worldwide fame as one of the most successful strongmen of his time.

And he won the title of America’s Strongest Man three times between 2007 and 2010.

Today, Derek is a full-time police officer at rank Sergeant in the Naugatuck, Connecticut Police Department, and is the Poundstone Performance Training Center owner in Waterbury, Connecticut.

He also hosts his Poundstone Power radio show on the Sirius channel where he is a great ambassador for proper nutrition and healthy living and serves as a positive role model for young people.

Poundstone and his wife Kristin are personal trainers and promote local Strongman competitions.

The injury was so severe that his doctors told him that he would never lift again because of his spinal disc herniation and spinal cord hemorrhage.¹

This type of severe back injury is potentially disabling for an average human being and would put the nail in the coffin of any future deadlift training.

But, Derek Poundstone pushed himself to train smarter and to never give up.

Miraculously, he eventually returned to not only compete, but also to win the majority of his Strongman titles after this terrible damage to his spine.

“Spinal disc herniation is an injury to the cushioning and connective tissue between vertebrae, usually caused by excessive strain or trauma to the spine.

It may result in back pain, pain or sensation in different parts of the body, and physical disability”.¹

Derek Poundstone Back Injury from an 805-pound Deadlift

On March 5, 2013, at the Arnold Classic in Australia, Derek tore his right bicep attempting to lift a 540-pound atlas stone.

This bicep tear injury is what led Poundstone to retire from competition in 2015 because the bicep never healed enough to return.

In addition, he was tired of the constant pounding and abuse of his body.

As he is reported to have said himself – “…I just got tired of the constant abuse on my body.”

What the aftermath of Derek Poundstone’s bicep tear looks like:

Derek tore his quad muscle a couple of weeks before the 2010 World’s Strongest Man contest.

Poundstone had hoped to defeat Zydrunas Savickas, the 2009 World’s Strongest Man winner, but was now not even sure it was possible to compete.

In 2009, Derek placed 4th after Brian Shaw in 3rd place and Mariusz Pudzianowski who took the silver.

Again, after his doctors told him that it was impossible, he did enter the 2010 competition and despite his torn quad, Derek managed to take 9th place.

Even more shocking is that the next day, he won America’s Strongest Man for the third time in four years.

One clear lesson for anyone who squats or deadlifts is that you must respect them both.

While the deadlift is a ‘simple’ compound movement, it is also dangerous and requires precise attention to technique and form.

The same holds true for the squat.

Another lesson is to never attempt your 1 rep max.

This deadlift that almost killed Powerstone’s career was the most he had ever lifted.

Some of the greatest champions in strongman history like Hermann Goerner who’s strength will leave you speechless, still never deadlifted his max.

Unless you are a competitive powerlifter, there is no reason to ever attempt your 1 rep max.

Poundstone’s body took quite a pounding during his Strongman career.

But, they were not in vain.

Derek Poundstone’s valiant efforts to come back every time from the worst injuries you can imagine can inspire you to never accept defeat.

You can succeed in transforming your body from fat to fit.

Even if you have tried a million times, as long as you still have your strength in you, do not lose hope.

Be a warrior for your health and fitness as Derek was for his Powerlifting and Strongman passion.

If you need to lose weight, use this simple diet plan to lose 20 pounds in 3 months.

And repeat it till you reach an ideal weight for your height.

Miraculously, the deadlift alone can dramatically change your body.

As long as you have your body, even if you are obese, do not despair, your body will do the magic if you let it.

At the least, learn from Derek Poundstone to never give up. 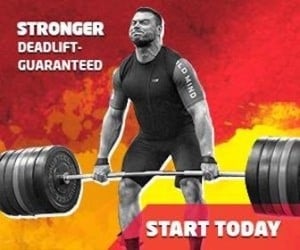