Home » Hugh Jackman Deadlift: How He Got Ripped For ‘Wolverine’
685 shares

The Hugh Jackman deadlift of 410 pounds put him into the prestigious 1000-pound club.

The 1000-pound club is exclusively for those whose deadlift, squat, and bench press total weight in one day equals 1000 pounds or over.

While he is better known for his movies like The Wolverine, watching Hugh Jackman deadlift is an inspiration for people of all ages.

Especially when you realize that Jackman’s age is over 40, you might find more motivation to get fit yourself.

He proves that no matter what your age, even if you have hit 50 or 60, you can still get stronger.

And if you think that you are too tall to deadlift, Hugh Jackman is 6 feet 2 inches in height and still deadlifting impressive weight.

Here is the video of Hugh Jackman deadlifting 410 pounds which put him into the 1000lb club.

Hugh Jackman called this video,  “The deadlift that brought me into the 1000-pound Club”.

A 410-pound deadlift at any age is impressive, especially at the age of 46.

If you have been trying to improve your personal record for the deadlift, you will understand why.

The X-Men Apocalypse star is not only a winner of Emmy, Tony, and Golden Globe awards.

He is also a winner at pushing himself to get stronger even at the age of 46 in his 410-pound deadlift video.

In one workout routine in one day.

To join the exclusive “1,000-pound club”, you must complete the squat, bench press, and deadlift within a 3-hour window.

It is true that staying strong and in shape is part of Hugh Jackman’s ‘job,’ but let’s not use that as an excuse to keep sitting on our couches.

If Hugh can do it, so can you, even if you do not have a personal trainer or several hours a day to work out.

Motivation for Couch Potatoes from a Deadlift

Hugh proves that if you:

You can build a stronger and leaner physique, even over the age of 40.

While it is true that you might not have a personal trainer to work out with two hours a day and to set up your meal plan, you can still get great results.

Video of Hugh Jackman’s Deadlift Workout for the Wolverine

Thought that 410 pounds was Hugh Jackman’s most impressive deadlift?

Watch the following video of Hugh Jackman Deadlifting and additional strength training for his role as the Wolverine:

Hugh Jackman Wolverine Workout | How He Got Ripped for Logan

Before using the deadlift workout program designed by David Kingsbury.

Now, here is how Hugh Jackman looked for his role as Wolverine in 2015.

An incredible body transformation fifteen years later at the age of 46!

This program was created by Personal Trainer Dave Kingsbury to prepare Hugh for his role as Wolverine in the X-Men movie series.

Jackman’s training regimen helped the 6 foot 2 inch Wolverine weigh in at 195 pounds and under 10% body fat.

A four-week block and one-rep max is the foundation for this strength training workout plan.

First, you need to determine your one-rep max for the deadlift, squat, bench press, and pull-up.

Not sure how to find your 1 rep max?

I’ve got you covered.

Find Your One Rep Max

Based on your information, Hashi Mashi’s One-Rep Max calculator will display your estimated maximum amount of weight and the number of reps you can lift.

The method for calculating your 1 Rep Max is based on Epley’s equation.

Step 2: Adjust the amount of weight and reps you tested with.

Warning: Do NOT attempt to lift the absolute maximum weight you think you can.

Once you define your one-rep max for these lifts, then use the following exercise workout schedule as Kingsbury related to Alon Shabo:

For example, if your one-rep max for the deadlift is 200 pounds, then your deadlift workout will look like this:

For example, if your one-rep max for the squat is 135 pounds, then your squat workout will look like this:

Calculate the pounds you will lift for your other exercises of squats, bench presses, and pull-ups using the same percentages.

You can squat and deadlift on:

leaving the bench press and pullups/pushups for:

Then the next week you can change it up by doing bench presses and pullups on:

Squats and deadlifts on:

After one week at the same weights, raise your pounds by 5 to 10 percent the next week.

This basic deadlift workout can get you into peak condition, if followed consistently, along with proper food choices.

If you feel that you can only squat and deadlift once a week to recover, so be it. 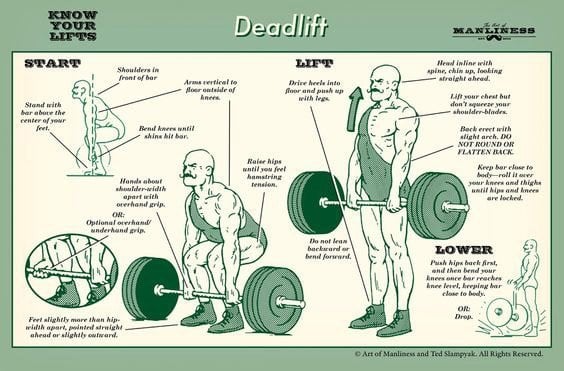 Jackman Knows About Getting Ripped Over 40

Let the Hugh Jackman deadlift inspire you to reach your fitness goals no matter what your age.

If not, read how deadlifts can transform your dad bod into a fit body.

Deadlifts helped me crush obesity, lose 75 pounds in 6 months, and get fitter than I thought possible at the age of 56.

If you are new to deadlifting or want to review the proper form before starting this Hugh Jackman Deadlift workout plan, check out these two articles:

If you’re an athlete, you must see How Deadlifting Turned Allyson Felix Into an Olympic Gold Medalist Runner.